This year we have decided that we want to stay put in two camp sites for our Spring trip to Portugal.  Turistcampo, between Lagos and Luz in Portugal. A Yelloh Village resort. Booked online for 22 nights. 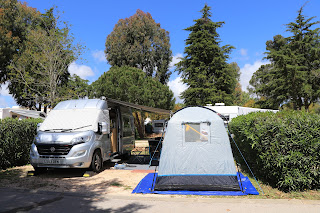 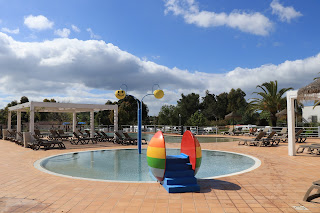 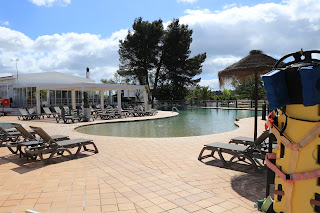 Turiscampo is a  large holiday resort well placed for touring the Algave. Probably one of the best kept sites we have been on. Scrupulously clean with staff constantly on duty throughout the campsite. Even the pitches get pruned and swept between customers. Toilet blocks rival a good hotel with plenty of hot water and a whole host of loos, complete bathrooms and showers. The resort is open all year round so caters for all weathers. There is a large heated indoor and outdoor swimming complex. An indoor and outdoor gym, kiddies play area and club and a great restaurant and supermarket on site. There are also a whole variation of huts on site some with their own hot tubs. Handy I guess for visitors. Our neighbours had their family visiting and collected them from Faro airport about an hours drive.

The restaurant on site has a snack bar as well as a proper restaurant and does well priced meals. We ate out quite a few times. It does get quite bust but we always managed to find a table. During the weekends there was usually some kind of entertainment. All the staff were really friendly and helpful and mostly spoke English. 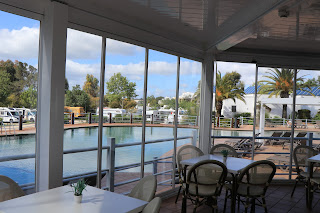 The site is tiered with pitches of various sizes. We went for the "deluxe" so we had our own water and drainage. Pitches are well marked with plenty of shade.

A bus stop outside the site takes you along the coast in both directions. Pria de Luz is the nearest beach, it took us about 35 minutes, an easy walk going down to the beach, harder on the way back as it's uphill, good exercise though. Luz is a great small village, quite touristy with a lovely sandy beach at one end and loads of restaurants and bars. A large expat community! 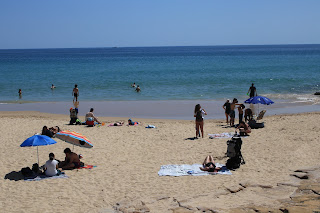 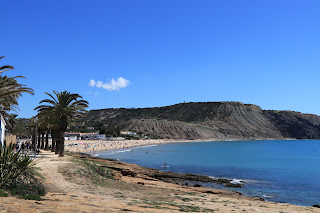 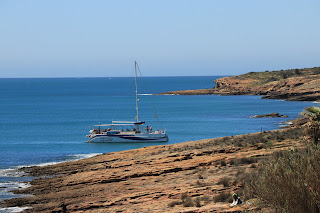 One of the attractions of the area is walking the coastal path. Known as the "Fishermans Walk" it extends for most of the Algarve coast. Very popular with German and Dutch walkers it can be very challenging in sections, though relatively easy to follow and well marked. 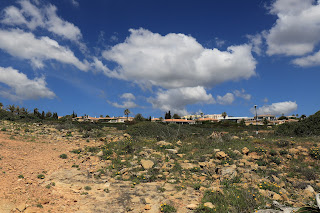 The section nearest to us was Lagos to Burgau. We kind of managed to walk the majority of this section over a couple of days. Beautiful views across the sea. We almost made Burgau but gave up on a very steep final decent to the beach. At the other end a very stiff climb ruled out the top of the Roche Niga! All my fault!! 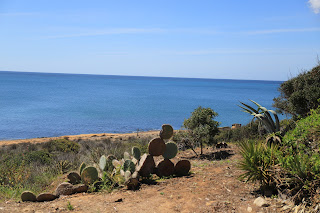 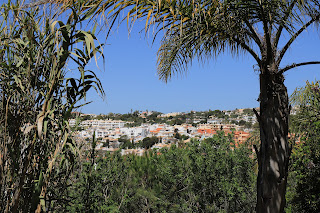 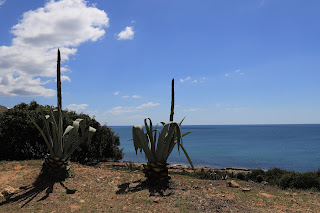 We watched as a few "bright young things" made the top. We know our limitations and descended back to the bar instead. Worth the effort though to nearly make the top!

Amazing how quickly three weeks flew by. We were just getting into the holiday spirit when it was time to leave. Certainly worth the long journey. We had a couple of damp windy days but lots of sunshine as well. A good time of the year to come in May/June the promise of summer sun and hardly any biting insects YET!

Our next stay, up the coast for an hour and a half for a month at Camping Ria Formosa ,Cabanas de Taveria and more sun we hope.

Posted by 4wheelcamping at 10:05 No comments:

Well, we are finally off for our first bit of camping fun since October 2020. Following our third cancellation, we WILL be off on through the tunnel and onwards to Portugal. We have had a few little    ( or major hiccups, like the rest of the world) in the last 12 months including a major relocation from the suburbs of town to the rural back woods near Glastonbury. A major move but at least we did something useful during lock down.
Krystal has been washed, packed, loaded and ready to go!! Let's hope we have completed the relevant paperwork properly.
After an interesting drive through the picturesque Somerset villages, a quick sprint around Salisbury, and a dash around the M25, we were finally on the road to Folkestone and the tunnel.
Note to self: look for a better route! This was the first time we had attempted the tunnel from our new home. Our usual comatose rumble along the M4 to London from Bristol had changed. We were slightly more alert.
In actual fact the journey was pretty uneventful, except for the long drive past the 35 miles of poor lorries and their drivers making for Dover. The tunnel was the usual slick operation we expect. No check of what we had in the fridge....just as well. No check of our jab certificates, which were all in order. A quiet casual conversation of where we were going and that was it. Tunnel, then France. We did use Den's Irish passport so I wasn't stamped out of the UK as we were together. We could stay forever!!
Escalles, Les Erables our first stop was just as it always was. A warm welcome from Sabine and we were soon set up for our first night. A nice meal in the local restaurant Les Falaise just 75 Euros ( and well worth it)  our first Kir and Pastis, we were finally on holiday. 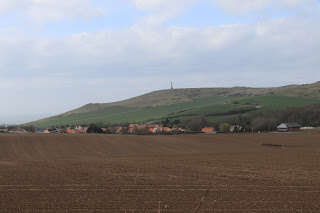 After a leisurely start we set off for the second big drive. A 6 hour stint mainly down the motorway to our second stop at  Camping Futuriste near Poitiers. A spot we have used many times before and really handy for the motorway. We arrived in time for a proper evening meal and a relaxing evening overlooking the valley. The campsite was pretty empty, to be expected at this time of the year. 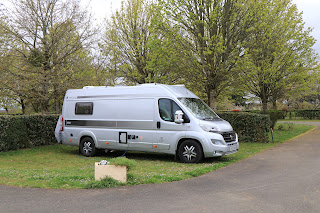 Nice little swimming pool on this site although we didn't try it. Great views across the valley though. Future scope well worth a visit, we have been twice and loved it. It does take a whole day to get around and an evening if you want to go to the laser show. 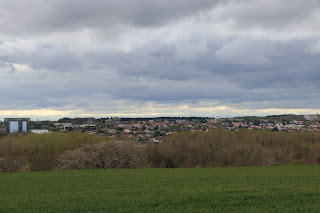 We had encountered a lot of  heavy rain on the way and the next day gave us much of the same. Heading for  Camping Larouletta on the French Spanish border at Urrugne, South of Bordeaux.
A long days drive and we made it. The rain had actually stopped and we were soon settling down beneath the spooky trees. 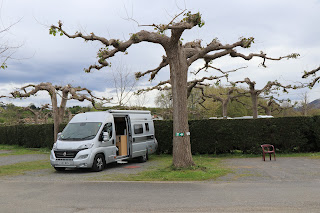 It looks like a scene from a horror movie but actually a really nice well maintained site. We keep promising to go back in the summer when the trees are in leaf. We wandered up to the supermarket up the road and treated ourselves to our first French drink at a local bar.
Next stop Spain. It was still unsettled weather but seemed slightly more promising as we steeled ourselves for the drive across the Spanish Sierras. The last time we came this way there had been snow. Luckily no snow on show for this trip. Another hike down the motorway and we were approaching Salamanca and our first Spanish stop Camping Olimpia. We spied this camp site the last time we were this way and thought we would try it out. Lovely welcome, we were on our own but the campsite owner was happy to cook us a meal in the restaurant. Exceptionally good food and service, including wine a modest 35 Euros. We were well pleased. A great stop over and next door to a service station. 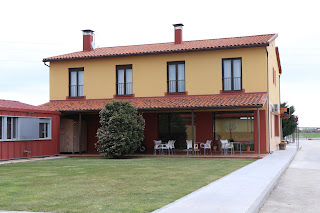 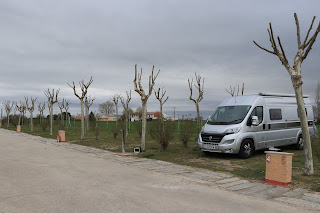 All by ourselves!
When planning this trip we had decided to give ourselves an extra days travelling to get there. This was a good move as it it so easy to under estimate the journey, especially if the weather is not so good. As we left Olimpia the Spanish sun came out. Next stop Portugal.
Camping Alentejo in Portugal our final destination before Turistcampo near Lagos. This campsite was near Everomonte a new place for us. Very tidy site with lovely loos, showers and swimming pool all for 15 Euros a bargain we thought. No restaurant, but we had a very nice pizza cooked for us on site and delivered to our van. A very well kept site with lots of shady trees which was great as the sun had come out. 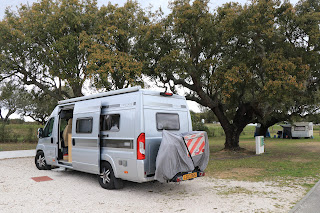 Last leg of the journey the final run to our first long stay site. Turistcampo, big and busy for Easter. Well worth the extra days travelling as we had an easy run to the coast and got to the site in plenty of time to settle in. Now where's the bar??
Posted by 4wheelcamping at 09:06 No comments: