Another little meander in the Welsh countryside courtesy of The Concorde Walking group.
Ably led by Paul this week, we set off from The Wye Valley Hotel in Tintern after pre ordering food from their tasty lunchtime menu. We were so lucky with the weather as it was a bright and beautiful morning, not quite Spring but almost!

The start and end of the walk was the car park a few minutes drive away up the hill at  Whitestone Picnic Site and Car Park. (On the road from Trelleck to LLandogo, opposite the turning to Tintern- map reference 523029) The picnic site is certainly a great one for families with children as there was a lovely little adventure playground there, with all the trees and woodland paths crying out to be explored. There is a toilet block too which looks fairly new but it is only open during summer months. 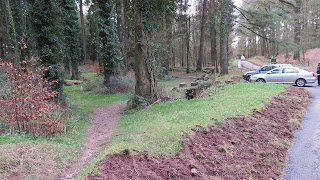 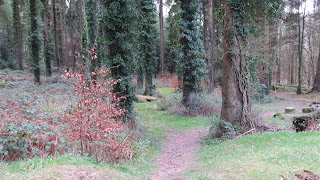 We set off with great enthusiasm up the first hill, a gradual uphill climb until we got to Ninewells Wood.The countryside is still very much in Winter mood but I like being able to see through the trees especially in deciduous woods whose leaves hide so much in summer. Still grey, but with a faint shimmer of green shoots here and there, spring is creeping nearer. The fields in these parts are very much marked by the grey dry stone walls which mark the field boundaries. 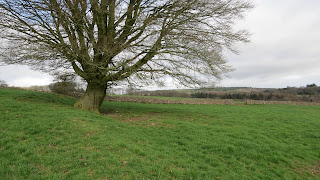 We travelled the paths through Ninewells Woods, boggy in places but easy walking, nattering about life as we went. Ninewells Wood is on the edge of Cleddon Bog a special area of scientific interest. Lots of bog plants exist here that are very rare. Lets hope none of them were trampled by our boots! Cleddon Bog has been described as "the best example of lowland bog habitat in Monmouthshire." I guess the blue super duck on the map Paul gave us, was a clue. Ever on wards, the watchful cows mooed at our passing, we encountered no wild boar....fortunately. The boar are apparently migrating from the nearby Forest of Dean. 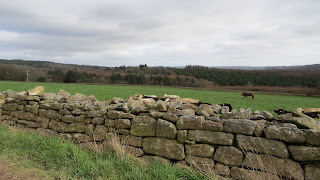 Sorry the cows were a bit camera shy.

We continued across the Broad Meend through the woodlands. The conifers in this part of the world are gradually being cleared so the land can to revert to heath land. This new habitat is  being fenced and grazed with Exmoor ponies, we saw a few. In the areas of broad leafed woodland I am reliably informed that the call of woodpeckers, song thrushes and bull finches may be heard. We heard a few tweets!! 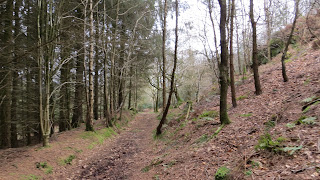 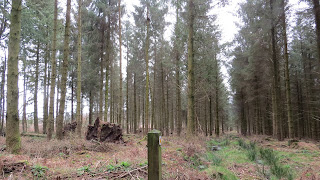 Abandoning heavy winter wear, we trekked on aiming now for the final assault on the pub. The Wye Valley lunch was beckoning, only a few miles to go. 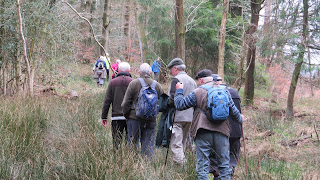 We walked on passed the poor tired tree with no gold in the roots. Duncan looked! 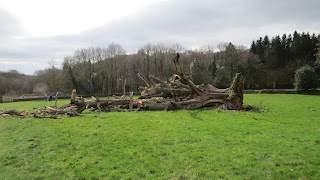 Cleddon Hall watched as we marched across it's fields! I wonder what Bertrand Russell, the philosopher and mathematician would have made of our motley crew. Bertrand Russell was born here in 1872, when the house was called Ravenscroft, a much more fitting name I think. Worth £1950,000 in 2013, this desirable 6 bedroom property with 32.5 acres was a steal for someone, Council Tax Band H. 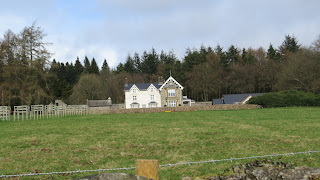 We soon arrived at Cleddon Falls or Cleddon Shoots as it is sometimes known. A spectacular water fall which looked beautiful as it gushed down into the valley. Cleddon Falls has been a favourite with tourists for many years. In 1840 there was a pub here called The Three Pots. Now as an SSSI ( Site of Special Scientific Interest) it is the home for lots of special and rare bog plants. The spirit of the ancient woodlands is also here, perhaps making friends with the spirit of the poet Wordsworth, who also lurks in these trees. 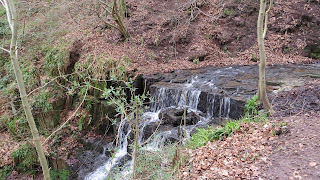 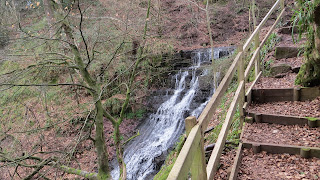 We clambered down the challenging set of steps to get a better view and then clambered back up. Certainly  a lovely spot to sit and muse. Finally on the home straight, we wandered back through the trees, you could certainly appreciate why poets like Wordsworth loved this part of the world. With the winding Wye below us we walked back through the woods and found ourselves back where we started. A great walk 4.5 miles said Mr Garmin. A very nice lunch was had by all back at the Wye Valley Hotel a walk we would love to do again. 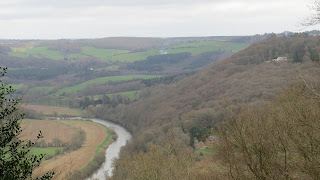 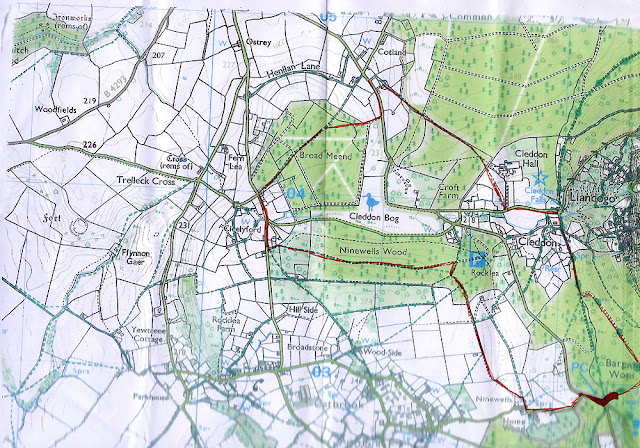 Here's a map of the route we took. Many thanks Paul!
Posted by 4wheelcamping at 12:09 No comments:

A Walk Around Wick

On a cold and rather damp though dry, February morning we joined "The Concorde" walking group for a little hike around Wick at the  Golden Valley Nature Reserve. Parking up at The Rose and Crown, a very nice pub on the High Street at Wick, we met the other walkers. Den had worked with some of the retirees back in his Concorde days. The other walkers all looked well kitted up for the hike and were a very jolly, friendly, bunch. 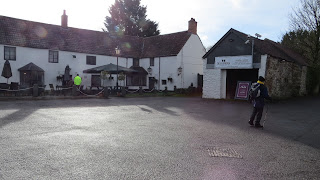 We set off from the car park under Andy, the walking leader's directions. The walking club members take it in turn to plan and lead the walks. We were heading for the nature reserve at Wick and the quarry. There had been much heavy rain, so Andy had been careful to pick a route he hoped would not be too slippery! Our first challenge was a lovely muddy hill, we were pleased we had the walking poles. I manged to get covered in mud, so a good start. Ever onwards, we passed the rather posh looking Bury Manor Castle Hotel. Built in the Gothic revival style in the early 19th Century, it looked very grand. We skirted the edge of the hotel buildings and slipped through the kissing gate at the side. 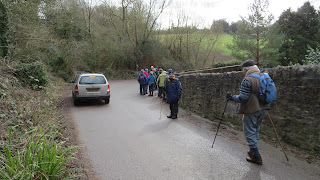 Up and across the fields we went, passing some very calm looking sheep who watched our passing with mild curiosity before continuing with their snacking on the grassy hill. Some of the sheep were shaggier than others, obviously a different brand with the shaggier coats and curly horns. The goats have been introduced as part of a local project to help manage the grassland. No volunteers from our group for the post of goat herd, vacancy still open. 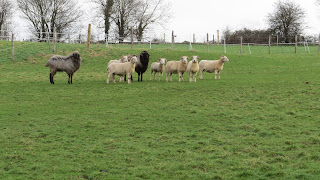 Upwards towards the quarry, which suddenly appeared on the horizon a huge blue green hole in the earth. 8.8 hectares of prime quarry land. The quarry continues with the mining of aggregates but is also being developed as a nature reserve. The irony of modern road development aiding natural conservation. We build bigger and more congested roads, whilst trying to preserve natural habitats. Home to peregrine falcons, nesting ravens and kestrels, the quarry is being managed sympathetically and gradually reverting to a more natural wild state. Encouraging the growth of rare species of flora and fauna has become a priority, as we build more and more roads. 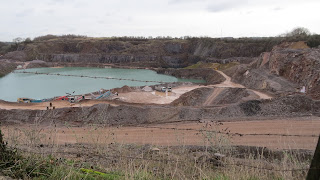 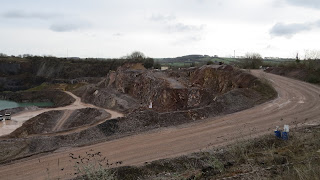 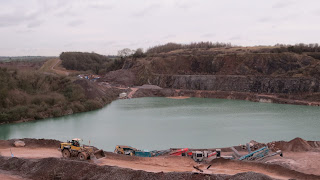 The view from the top of the hill overlooking the quarry was breath taking, to think of the thousands of years it has been there. Nestling in the valley in the ancient woodlands, if only the stones could talk.

We continued on the walk taking in more of the natural wild life, the ostrich were a bonus. The strange banging noises they made sounded like African drums, perhaps they were drumming up the sun. Some hope! 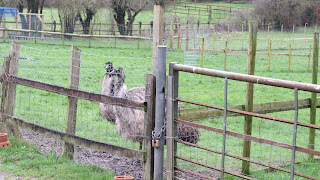 After a refreshing coffee break we headed on towards the Ochre Works. Ochre is a fine mix of clay and iron oxide. Red ochre is formed when water filters through the minerals in the bedrock. The production of ochre was continued until the 1970's when the mine closed. Wick red ochre was used to colour The Mall around Buckingham Palace and exported all around the world for use in colouring many things. All the that remains now is the weir and the place where the factory stood. We climbed to the top of Ravens Rock and looked down on the tumbling River Boyd below. We didn't meet any of the bats that now nest here, guess they were having a snooze in the middle of the day. By night it is a place for at least ten species of bats which roost in the tunnels near the weir. One of our party did try the ochre as war paint, it worked too, lucky a bit of water got it off! 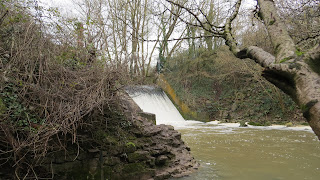 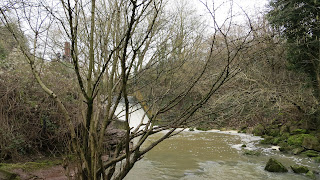 Looking down over the River Boyd. "There's signal crayfish in them waters!", it was too cold to investigate further. Daubenton Bats skim the waters at night. 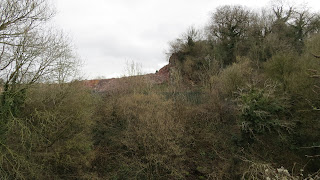 Here is Ravens Rock, peregrine falcons have nested here for the last 10 years. No signs today yet.

We continued back down the path. A strange man watched through the trees with half an eye on the interlopers as they passed by. 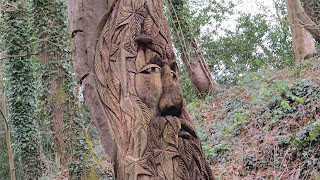 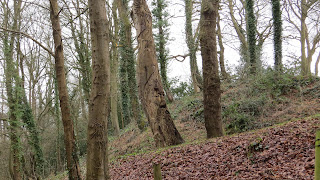 Down through the magical red glen with red ochre on our boots. Perhaps following in the footsteps of the miners of long ago wending their way back to the pub after a long days labour in the mine.  Certainly an interesting couple of hours and a walk we may try again on another day. We made it back to the cosy log burner in the Rose and Crown, the heavens opened and it poured with rally heavy rain. The wood spirits were certainly on our side.
Posted by 4wheelcamping at 11:05 No comments: