A Trip to the IH Factory at Knottingly.

A few bits of outstanding warranty work remained to be completed on April! Finding the frustration of dealing with Nick Whale wearing, we decided to go straight to the top! A quick e-mail to Ian Hartley himself and we considerably cheered up.

We booked April in with Carol from IH for the 1st February at the IH factory. April was going back to her birth place!

This was a Monday morning and we were asked if we could be at the factory for 8 am. We decided a leisurely drive to Knottingly near Leeds, on a Sunday afternoon was the preferred option. We were not sure how long the work would take to do. We were having a cupboard straightened up, a battery charger looked at and Den had decided he wanted sparkling fairy lights on the awning, so that was being done as an optional extra! Quite a big job we were told as the wiring had to be run in.

Staying in the van was an option but we decided we would rather just drive up and see if we could get  a bed for the night elsewhere. Good old Lenny Henry! a Premier Inn around the corner 5 minutes stroll to the factory and only £74 for two nights...booked and paid for. We were off!

The journey up to Knottingly was fine if somewhat long, around 3.5 hours later we arrived, checked in and wandered around to the factory. Not quite sure what I was expecting but there were loads of IH vans lined up outside and it looked business like!
The Premier Inn lived up to expectations, lovely big room, loads of easy parking and very clean. The Brewers Fayre next door was good for food, not fine dining but more comfort eating! The bed was comfy and minor road noise didn't keep us awake. Following a huge breakfast we got going early on Monday morning.

The factory were ready for us we had a good look around the new sales area at all the various versions of IH vans. The staff were really helpful and we were made most welcome. 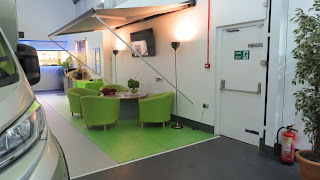 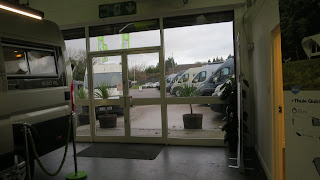 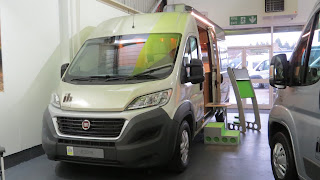 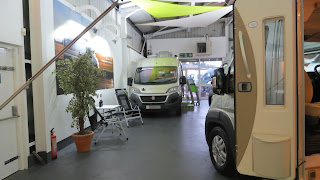 We were told that there was a train station across the road if we wanted a day in Leeds, but Hurricane Harry put us off a bit, the weather was dreadful very wet and cold. We decided to go back to the Premier Inn and wait in comfort at least we could watch day time telly with a clear conscience. A day spent lounging around passed quickly, luckily we had taken our kindles. Carol called at 4 pm for us to collect April. Most of the work had been completed, the battery charger now had a lovely red light so we knew it was actually working. The cupboard was fixed and April had a set of sparkly fairy lights, otherwise known as awning LEDs. We booked the habitation check for April in April, cause for a celebration maybe! Any other minor jobs would be finished then, including replacing the actual LED lighting strip, sadly some of the sparkle had faded in a few lights. I think they were a bit embarrassed to tell us that, but as the bulk of the work had been finished and the lights did mostly work we weren't too worried. Even as they are, they looked pretty good!

Back to the Premier Inn then for a meal ( two for the price of one ) and a welcome glass or two of wine. We had another peaceful sleep and left on Tuesday morning after our mini break. Certainly a relatively stress free way to get the habitation check or warranty work done. 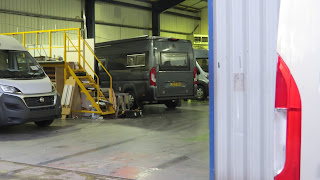 A peek of our April going in for her operation.

Now off for the next saga with Fiat. Ignition switch on recall to be fixed this afternoon, another trip to the wilds of Wales. We are off to the Fiat dealer in Chepstow. 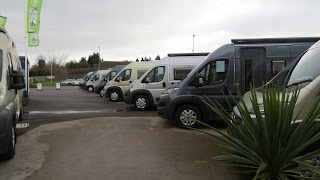 I wonder what the collective noun for a bunch of IH vans would be.....?
"Ian's Hoard" or"In Hoc " they're not cheap !

Posted by 4wheelcamping at 04:50 No comments: