On the move again. We had decided to make for the coast and get a bit of sea air. As things worked out probably not our best decision. We were heading for Mimizan a holiday resort on the Atlantic coast where we had enjoyed many holidays with our children. The last time we had been that way was in 2008. The place we usually stayed was by a lake at a place called Aurilandes a few miles from the coast. We first went there 30 years ago and used the site a lot when we used to do wind sailing with the children. Always popular over the years, the site had become more commercialised and full of huts over looking the lake. In our opinion ruining what used to be a beautiful view but that's progress then!

We set off from Le Pins heading towards the coast, then we decided to take a slight detour and visit the Marqueze Ecomusee Landes at Sabres, a place we had passed before but not actually stopped at. It certainly was a beautiful morning and really hot. We parked April under a tree in the large car park and headed for the train which took visitors on a journey into the park. 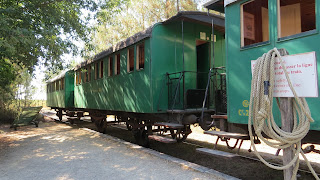 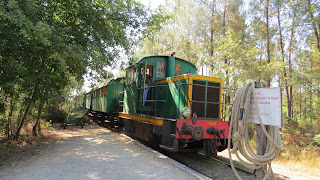 The train took us on a 20 minute journey deep into the Landes forest. Sitting in the basic train and rattling along not sure where we were going, provoked thoughts of the poor people who were transported in similar vehicles during the war. The train clunked and swayed through the pine trees before arriving at our destination. We clambered out into the brilliant sunshine. 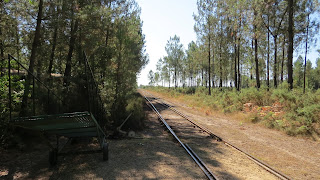 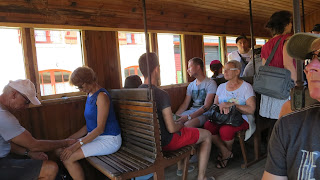 The museum was created in 1969 to try and preserve and demonstrate the traditional way of life of the people who live in the  Landes. The area was very remote but extensive planting of pine trees to check erosion of the sand dunes and coast, changed the eco structure and by the early 1900's the way of life was beginning to disappear. The museum seeks to preserve this heritage. The site is laid out in various zones to explain farming, recreation and traditions. Buildings have been transported to the park and restored. 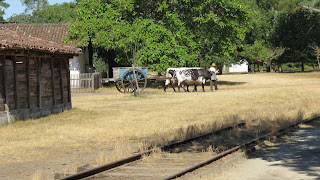 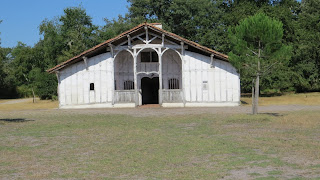 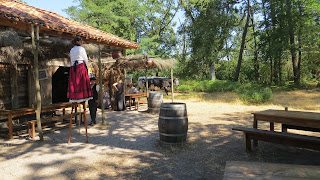 Walking on stilts, quite normal in these parts. The Landaise as marsh dwellers used stilts to get around in inhospitable areas. At social gatherings people even used to dance in them. At the museum there were folk groups performing traditional music, food being prepared in old style ovens and farming being done as it used to be. 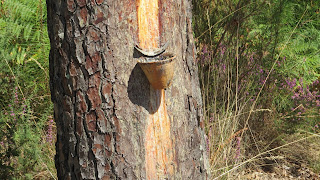 The site had lots of people dressed in traditional costumes demonstrating various skills and crafts. Stilts were made from the abundant wood, also numerous games to amuse the children when they weren't doing chores. Resin from pine trees also played a great part in the economic sustainability of the area. 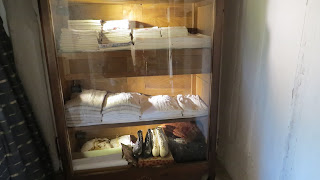 I personally prefer the social history and thought the cupboard of a young bride's trousseaux very touching. The people here led such a harsh life but the communities were very supportive. After a long, hot but fascinating afternoon, we continued our journey to the coast.

The joy of having a camper means plans can be made and then amended fast. We arrived at Aurilandes and quickly abandoned the idea of staying there, it was packed!

We quickly headed inland a few miles and found a delightful municipal site at a place called Pissos, only 14 Euros a night. Set amongst the pine trees, beautiful clean sanitary block, swimming pool, cycle track nearby and a bar just up the road.  Even better it was half empty. We found a spot and settled in. Perfect. 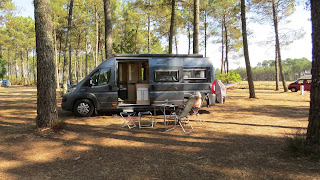 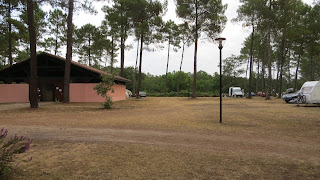 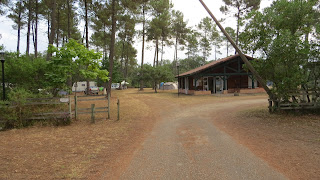 The site at Pissos would be a brilliant place to stay, away from the madness of the coast and perhaps drive out to the beaches, especially in August. We may well try that next year.

Our next stop was to be the Bastide town of Eymet. We had driven through it before and thought it could be an interesting place to while away a few days. Using our happy little SatNag lady we found our way to the next venue. The campsite was actually in the town behind the chateau of Eymet. Monsieur Le Camping proved to be quite a character and after much eye rolling and tutting about the fact that we hadn't booked in August, managed to squeeze us in to a nice little pitch for a couple of days. Eymet is quite an interesting little town, certainly full of Le Franglaise, Brits who congregated in the village square like starlings, waiting to swoop on all the available restaurant tables, with their little flocks of chirping children or twittering teenagers. 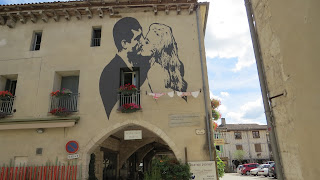 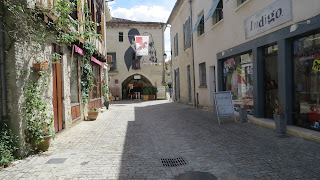 We enjoyed our stay, visiting the local evening food soiree, wandering around the interesting backstreets and generally chilling out. Not sure if I would want to return to this site as it was a little chaotic and the toilet block was a little neglected, although clean but well worth a short stay.

After feeling suitably relaxed we decided to move on. Chateau Hautefort was next on the agenda. We had tried to visit before but arrived too late to go around the house. This time we made sure we got to the chateau in plenty of time for the "full experience". We did the French thing and picnicked in the car park. We left April in the shade and set off to climb up to the chateau. 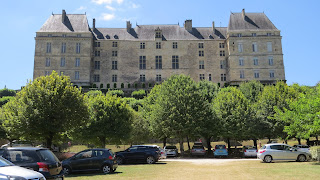 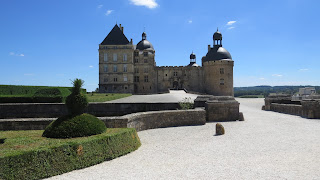 The chateau is an imposing mark on the landscape with beautiful French gardens. 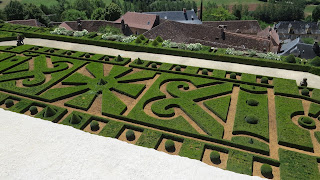 If we had hedges they would never look like this! 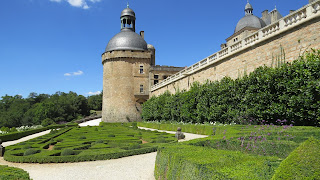 The views across the valley were amazing. We climbed a few steps and prowled around a few cellars. Sadly the inside did not match expectations and were not a patch on our National Trust properties. Parts of the chateau had been destroyed by fire in the 1970's but restoration we thought, was not great. Still, worth a visit and it was a beautiful day.
Madam SatNag found us another campsite not too far away and before long April was happily set up at Camping La Grenouille 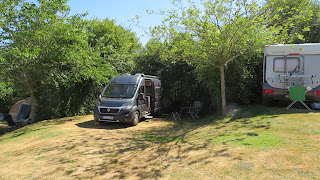 Camping La Grenouille was a Dutch run small camp site. The most expensive site we stayed on, but it did have a swimming pool and the toilets although only just matched to the number of customers, were incredibly clean. 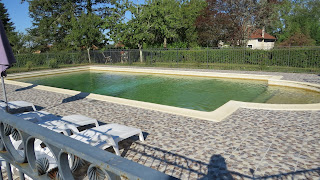 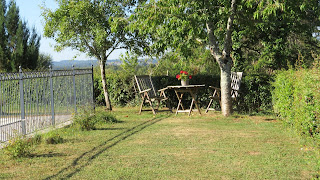 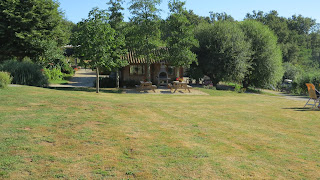 The next morning we were on the move again. Heading for another small lake. Part 3 to follow.
Posted by 4wheelcamping at 10:23 No comments: