Finally after nearly 7 months our new baby has arrived. A lovely slate grey, rear lounge panel van conversion who we have called April! Not that original but very appropriate.

For the last few months it has been very strange being  "Non Motor Homers" but our new van is a real treasure and so warm and comfy! We have decided that strictly speaking April is a "Camper" rather than a motorhome, somehow camper van seems to fit her and us better.  We picked her up at end of April and have spent the last few weeks bonding. We have already managed 7 nights away, so feel that we are really getting to know each other really well. 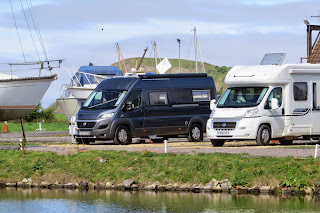 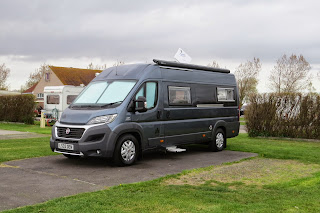 Although small, she is perfectly formed with all her bits intact and everything working as far as we can tell. We recently spent a weekend away at Uphill Marina near Weston Super Mare, parked up by the side of a Bailey Approach and felt no pangs of regret whatsoever. April certainly seems to suit us so much better and for us is almost proper camping, well it will be when the sun shines.

As soon as we got April home we started to pack her. Its amazing how much one motorhome holds. We decided to be ruthless in packing the new camper, so quite a bit has been left out. As we filled her up with stuff we discarded lots of bits, did we really need 6 tin openers?

Crockery, cutlery and tools were all culled. We are still not completely sure we have got it right yet, but a few more trips should tell. She drives beautifully and although initially filling the tank up with fuel was a financial trauma, we think she will be really economical. The tanks hold slightly less water and waste and the fridge is smaller but more useful. Everything we really needed fitted in...just, we are still adjusting!

Of course a new baby has to have a few new "little extras" we have ditched the lounging Lafuma chairs ( relegated to the garden) in favour of two new Isabella chairs, the table is on order. Sadly our wonderful weather means we haven't tried them out yet. Things we have to leave out.

Time will tell if more has to go.

So far we have managed a few country lanes and supermarket shopping so we must be getting better. Can't wait for the next trip.